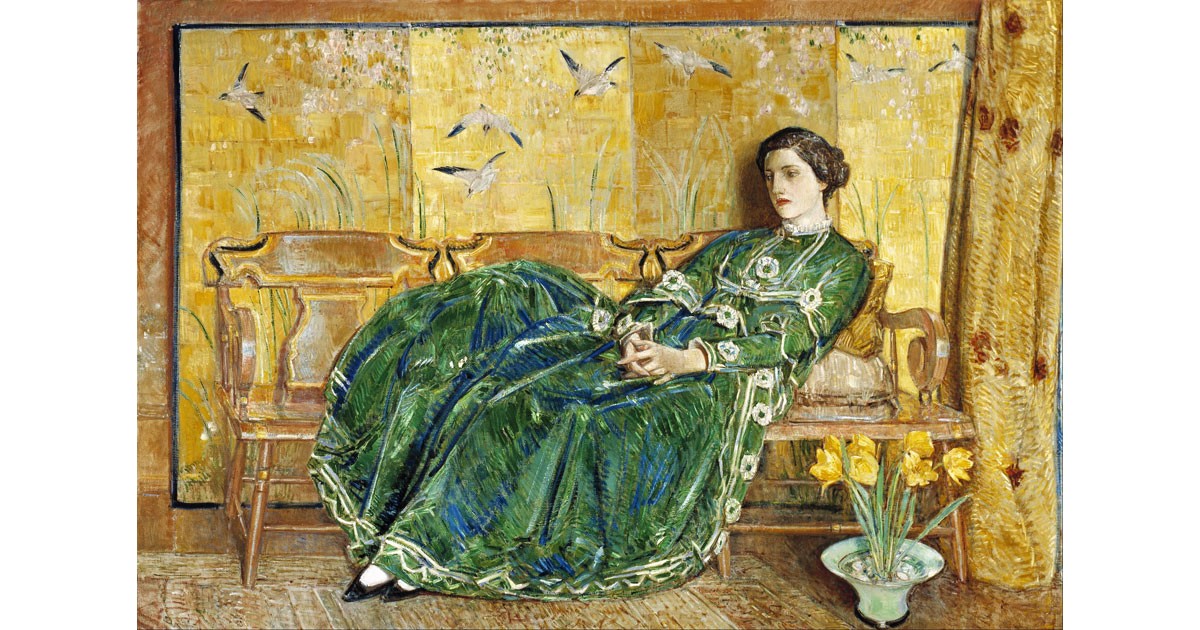 A prolific painter and a foremost American Impressionist, Childe Hassam may be most important in his role as a bridge between American art and the Impressionist art of Europe.

His early drawing and watercolor studies were not taken seriously by his parents, even though their aesthetic tastes were well-developed as collectors of antiques and art. Hassam’s aunt, however, encouraged him by taking him to meet artists in their studios. His father’s business was successful and the family was quite well off until 1872 when a fire destroyed his father’s business, along with others, during a conflagration in Boston’s commercial district.  At this point, Childe Hassam was 17 years old and his life changed. He left high school to help support his parents and siblings. His father’s contacts got him a job with the publisher Little, Brown & Company as an accountant. His accounting career lasted only three weeks before his supervisor suggested he find other work as an artist since he spent most of his time drawing. Taking this advice, he used his free time to learn wood engraving. Eventually, he became employed as a commercial engraver and an illustrator of children’s books. He began to paint again, sometimes with oil paint instead of his always – favorite medium, watercolor paint. He studied painting in his spare time at the Lowell Institute and the Boston Art Club. By 1885, an exhibition of fifty of his watercolors was held at a Boston gallery.


Hassam was attracted to travel throughout his life because it fit so well with his desire for new painting subjects. France was a favorite place and one visited often during his lifetime, sometime spending years at a time in Paris. Coastal Maine was also a favorite. He spent many vacations there and became part of a salon of writers and painters. In Maine, the garden of his friend, Cecilia Thaxter, was a striking subject for his paintings and were early examples of his love of color, and impressionistic interpretation of his surroundings.


Hassam married Kathleen Maud Doane in 1884 and lived in Boston where his painting subjects reflected his city environment. The two moved to France for several years so Hassam could attend the Academie Julian, a school attended by numerous American and European painters in the 19th Century. It was at this time in Paris  that he observed the work of artists who were being called Impressionists. He appreciated their work as the techniques the Impressionists used produced results that were similar to his own, especially the atmospheric effects of light in various kinds of weather.


After a return to America, the Hassams settled in New York where Hassam joined the New York Water Color Club and, later, the Society of American Artists. He was a popular figure who adopted a dapper, if somewhat affected, personal style, wearing tweed country-style suits in the city and using a monocle. His dark complexion and mid-eastern sounding name encouraged him to adopt mannerisms, such as putting a Turkish flag quarter moon after his signature on paintings, that made him sound and appear slightly exotic. He did not correct this impression even though the name Hassam was derived from his English ancestor Horsham and corrupted by fast speaking over a two hundred year period.


New York was where he made art connections with John Twachtman and J. Alden Weir. Their friendship grew as a result of a common admiration of French Impressionism and their desire to paint in that style. They were joined by Theodore Robinson who had spent time In Giverny, France with Claude Monet. They would get together to study the work of Monet, Degas, and Renoir in galleries and private collections throughout New York, as works by these eventually famous artists were not yet in museums. These friends became leaders of American Impressionism. Perhaps no one was more of a leader than Hassam, if only from the standpoint of his art output. He produced more than 3,000 paintings, etchings, and lithographs, plus drawings during his lifetime.


In a debate in 1897 over Impressionism at the Society of American Painters, Hassam was one of ten artists who resigned to form “The Ten Painters,” a group that shared a desire to  paint in the Impressionist style. At this time, Hassam moved to Long Island. He also joined other American Impressionist painters and formed an Art Colony in the area of Cos Cob. His friendship with J. Alden Weir resulted in him often spending time painting at Weir’s farm in Connecticut.


In their group exhibitions in New York, the reviews of “The Ten Painters” ranged from wonderful to awful as some critics had difficulty understanding Impressionist aesthetics. The public reaction, too, was mixed. Hassam was seen as the most radical of the group. His brushstrokes were so rapid, many times he was almost using a dry brush, allowing raw canvas to be clearly seen between strokes of paint. He never restricted himself to one kind of subject matter. He painted nudes, cityscapes, landscapes, and still life. He loved the country and the city equally. His time in New York was exciting too, as the development of skyscrapers was changing the shape of the city. He sometimes set up an easel inside a parked, horse-drawn carriage and painted the light effects on buildings, streets, and crowds.


Hassam responded to the outbreak of WW l with a patriotic outflow of paint used to produce paintings that encouraged Americans to buy War Bonds. The paintings depicted flags flying from buildings along 5th Avenue in New York in a dynamic kaleidoscope of shape and color. He wanted the almost thirty flags always to be seen together and placed in a memorial when the war was over. He was bitterly disappointed when that failed to happen.


Childe Hassam was a leader in introducing Impressionism to America and remained committed to it. He had great difficulty accepting later avant-garde art movements and was quite outspoken against them. He remained true to American Impressionism and by the time he passed away in 1935 most Americans had come to love it too. 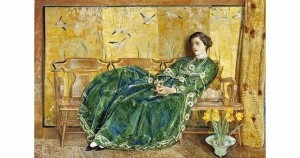