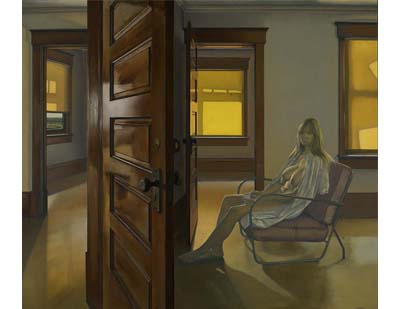 In looking at the entire career of visual artist Billy Morrow Jackson, one can see a thread of reality based on his sensitivity to his surroundings, both physical and social.  His work has exhibited a response that, at times, has been quietly naturalistic, aggressively expressive, or metaphorically dreamlike.

Born in Kansas City, Missouri in 1926, Jackson went to St. Louis to study art at Washington University where he was greatly influenced by his instructor, painter Max Beckmann, who had been one of the artists persecuted by Hitler before he was able to emigrate from Germany. Jackson’s degree meant he studied all art media. But, after graduation, he initially concentrated on printmaking, doing woodcuts, lithographs, and etchings.

After getting married in 1949, he and his wife spent two years in Mexico where he honed his graphic skill with subjects of street life done in an expressive, angular style reminiscent of the work of Beckmann. Besides being influenced by Beckmann’s early style, it would appear that Beckmann’s experiences in Germany also reinforced Jackson’s innately strong social consciousness.  His belief in social justice came to the fore again during the 1960’s Civil Rights era with his printmaking used to portray injustice both narratively and in metaphor.

Between his trip to Mexico and the 1960’s he earned an MFA degree at the University of Illinois where he continued to use his Mexico experiences for his graphic subjects, but employed more varied subject matter in his painting, moving toward a romantic realism, especially in landscape.

Jackson was commissioned to do illustrations in watercolor for the U.S. Bureau of Reclamation water projects that included dams and lakes in the western United States.  He also was commissioned by NASA to illustrate the Apollo project and did several murals for government buildings in the State of Illinois that show his ability to understand designing within an architectural space.

Jackson is best known for the landscape work done as a mature artist, although other subjects completed during his career include interiors, figure paintings, and portraits. The low horizon line of Illinois and its agricultural landscape punctuated by isolated farmhouses, and combined with an emphasis on huge sky and dramatic light, create a romantic feeling to his oil paintings. His paintings are often compared to those of Edward Hopper or Andrew Wyeth. The sense of quiet, contemplation, or, even, loneliness attributed to paintings by those artists is also felt in Jackson’s paintings, particularly his subjects of interiors with a figure.

Jackson’s paintings were usually done in oil, but he never limited himself to one medium. It would have to be said of him that he was proficient in an amazing number of art media ranging from watercolor to oil, to the intricate work of color reduction woodcuts, the skill required for lithography, to the design of large scale murals. In each medium he used, his overarching strengths were his consummate draftsmanship and his sensitivity to his subject. 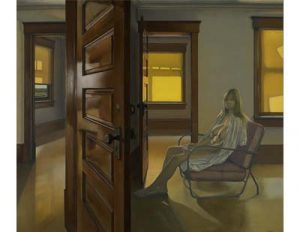