Art in family history is important because it contributes to the visual experience of learning. Becoming a successful researcher requires you to develop a knowledge of the basic sources and to use them. The use of art opens our minds to a different place and time. The past really is a foreign place. Studying contemporary art of the time and place of your ancestors’ lives will give you some visual cues to understanding process and procedure of daily life. Let’s take marriage as an example and see how the art enhances our understanding.

Persons with property to protect, from inheritance or a previous marriage; a groom, required by a powerful family to provide a settlement on the bride, before the marriage took place; an underage bride and groom forming a negotiated marriage alliance were married by contract. The contract spelled out in detail the marriage portions and the penalties for non-fulfillment. These marriage contracts are registered with the deeds—because they affect the transfer of property.

Historically couples married in the ancient tradition of a “marriage by declaration” or “handfasting” ceremony, which was law in Scotland until as recently as 1940. This simple civil ceremony enabled couples to marry by declaring in front of two witnesses their wish to be husband and wife, and they were legally bound.

Marriage by consent or declaration before witnesses was used in Quaker communities. At first illegal, then frowned upon, then legalized in most Southern states and other places where Quakers resided. The original Quaker marriage record listed all attendees at the event—males in one column, females in the next.

A religious ceremony uniting a bride and a groom celebrated at the church near where they reside, after proclamation of banns. This practice allows time for anyone who knows a reason that the marriage should not take place to come forward. If bride and groom reside in different places, the proclamation and the marriage may be recorded in both places.

Most marriages in America are performed by license, regardless of who officiates at the ceremony. The licensing process is a civil function of the local government—county, town, or city.

An engagement, betrothal, or fiancé is a promise to wed, and also the period of time between a marriage proposal and a marriage.

This is a medieval form of marriage considered, in some Southern states especially during the Colonial period, to be binding upon the contracting parties. Only an official release severed the relationship. The release stipulated whether the parties were free to marry someone else. This kind of marriage is often officially recorded years later when a spouse or children file a claim for recognition of rights.

Art gives us a deeper glimpse into the daily lives of our ancestors. 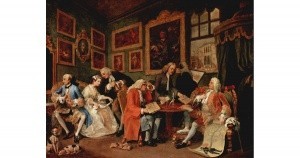