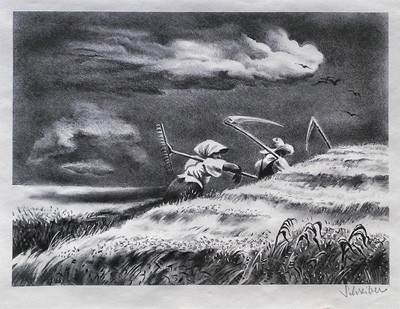 Although not well known today, Georges Schreiber was a successful painter and printmaker during the 1930s and 40s. He was born in Brussels, Belgium in 1904 of German parents, attended a German Gymnasium in Brussels for his early education and, later, studied at an Arts and Crafts School in Germany and at Academies of Fine Art in Berlin and Dusseldorf.  He was 10 and living in Brussels when WWI broke out. The Belgian children gave him a difficult time. When his family returned to Germany he was 14 and the German children gave him a hard time for “missing” the war. All of Europe had been affected adversely during WWI but life in Germany after the war was particularly hard in the 1920s since Germany was the loser in the conflict. During his late teens and early twenties, he did drawings and cartoons for German newspapers and periodicals in addition to the private fine art he did in his studio.

Schreiber emigrated from Germany to the United States in 1928, supporting himself at first by selling drawings and cartoons to newspapers in New York. This gave him time to set up his studio, continue his serious art, and find dealers to represent him.


He was attracted to American Scene painting and Regionalist ideas of what the content of American painting should be. “I don’t want to be just an American with citizenship papers”, he said. “I want to completely associate myself with America”. Toward this end, Schreiber made six trips across the United States between 1936 and 1939, observing daily life of Americans in every state, and portraying their work and leisure in painting and in lithography.  An exhibition of his paintings, “Panorama of America”, based on his trips, and shown at the gallery of Associated American Artists in New York was so successful, all the paintings were sold before the exhibition opening.  Now doing very well financially, he purchased a summer home in Martha’s Vineyard, where many artists lived. He became great friends with his neighbor, artist Thomas Hart Benton.


Schreiber and Benton worked together during WWII for the Navy on an art project depicting life aboard a submarine, Schreiber also worked for the Army as an artist and designed posters encouraging people to purchase War Bonds.


His art periodically led him back to illustration. When Bruno Hauptmann was on trial for kidnapping Charles and Anne Lindbergh’s baby, Georges Schreiber was the courtroom artist. His sketches of that trial can be seen in many documentary films. He continued to do cartoons and sketches for newspapers; he illustrated the books, “Little Man What Now”, and “Portraits and Self- Portraits”, and contributed work to “Life” and “Fortune” magazines.


Schreiber preferred rural to urban subjects. His compositions frequently depicted human figures against simple landscape backgrounds.  He tried to understand the people he drew.  “I want to live these people…..not depict them”. 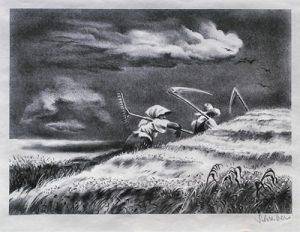