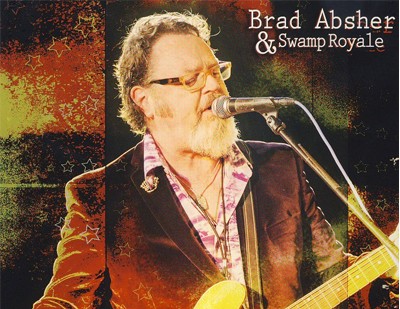 After years of living and playing in and around Tulsa, soaking in influences like JJ Cale, Leon Russell, Bob Wills & His Texas Playboys and Eric Clapton drummer Jamie Oldaker, the award-winning Louisiana-born blues singer-songwriter – dubbed the “unofficial ambassador of Gulf Coast Soul” – moved to Houston where his wife’s career was blossoming. At one point, he balanced life as a stay at home dad with a lovely daughter (Madison) with gigging four to five nights a week with his band, Swamp Royale. Absher felt like life had given him a colorful, comfortable portal through which to hone his craft.


Since then, he and his band have been performing relentlessly across the region, sharing their tasty gumbo of blues, gospel, soul, Americana, Southern folk, jazz (and whatever other spices were in the wild and freewheeling kitchen sink) and recording two acclaimed albums, Gulf Coast Soul and Big Shugga.

Serendipity (let’s just call it Lucky Dog syndrome) struck again when he met Larry Fulcher, longtime bassist for Absher’s blues hero Taj Mahal, at Rockin’ Robin, the vintage guitar store in Houston where Absher works a few days a week. The two started hanging out and became friends. In 2014, Fulcher was on the panel at the International Blues Competition in Memphis, where Absher and Swamp Royale were in their second year as the event’s musical representatives of Houston. The panel also included Richard Cagle, owner of the independent label Montrose Records. Fulcher and Cagle loved what they heard and immediately decided to make a record with Absher and the band.


Recorded at Montrose Records Studios in Houston, Lucky Dog was produced by Fulcher and features him on bass. The classic, high-energy old school production features Absher (vocals and guitar) and his regular band mates Mike Patton (drums), Barry Seelen (keys), with Andy Saad (tenor sax) and Anthony Terry (baritone sax) brassing things up on half the tracks. The band geared up for the project backing up Houston based 2015 Blues Music Award nominee (and Montrose Records labelmate), powerhouse vocalist Annika Chambers.


Absher wrote six tunes – including the opening tribute to his wife Amy “Woman Who Loves Me” and “I Need A Drink,” a sobering reflection on a recently departed friend – while Fulcher and fellow Phantom Blues Band (formed originally as Mahal’s backing band) member Tony Braunagel wrote “Trouble.” There’s one traditional gospel tune (“Jesus on the Main Line”) and a handful of previously recorded tunes (including Bill Withers’ “Same Love” and “Rather Be Blind” by Leon Russell) are given the “Swamp Royale” treatment.


Currently being promoted to Triple A and Americana radio outlets by Peter Hay of Twin Vision, Lucky Dog is already popular at numerous blues outlets. It recently hit the Top 15 on The Roots Music Report’s Top 50 Texas Album Chart in the sub-category of Electric Blues, while “Same Love” hit #2 on the Top 50 Texas song chart. The album also recently reached #100 and is steadily climbing on the Americana Music Association national radio chart.


Absher owes a good chunk of his music career to his passionate openness to invitation. As a southern boy, he grew up in Lake Charles, Louisiana on the Texas border and soaked up a lot of local color. “Dad opened a barbecue restaurant for Mom to run after she stopped teaching school,” he says. “There was a bar down the street called the Bamboo Club that stayed open to 11 p.m. The guy on the door let me sit out front with him. The band on Friday and Saturday nights was Clifton Chenier featuring Buckwheat Zydeco! They were playing stone cold funk, South Louisiana-style, and the guitarist was doing the same stuff Jimmy Nolen was doing with James Brown. Then and there I knew this was what I was gonna do.”


Reflecting on his current career and goals, he adds, “It was so great working with Larry on Lucky Dog. I also feel like we’ve successfully harnessed the true sound of Swamp Royale, and collectively we’re committed to continue what we’ve captured so far…it reminds me of that vibe Van Morrison had in the `70s with the horns. For me though, it all comes down to doing what I truly love to do…I write love songs and socially conscious songs, hopefully songs that resonate with music lovers…all ladled with love from the gumbo pot that is my life.”  www.BradAbsherMusic.com. 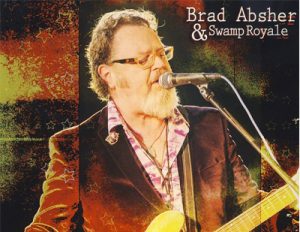