The idea for this came to me when my coauthor, Meredith, and I were in Montreal late one February, working on the cookbook. It was eighteen degrees below zero, and my ambitious plans of running the famed stairs at the L’Oratoire Saint-Joseph quickly degenerated into eating and drinking the best of what this city has to offer. Which is a lot. And all I could think about eating was rösti, a crisp potato pancake—a hash brown, if you will. Using winter root vegetables brings a depth of flavors and textures. This is perfect for lunch or dinner in an igloo. Serves 6 to 8.

Heat a large cast-iron or heavy-bottomed ovenproof sauté pan over high heat. Add a dash of the olive oil and a little butter: I recommend you fry a spoonful of the mix to test for the balance of seasonings and adjust your overall mixture accordingly. Now get the full amount of olive oil and butter sizzling. The hotter the fat is, the less soggy the finished rösti will be—and know this: the crust is the most important part.

Add the vegetable mix to the pan, spreading it out to form a large, thin pancake. Let it sit on high heat until it just starts to brown around the edges, 3 to 4 minutes. Transfer the pan to the oven and bake for 10 to 12 minutes.

TO SERVE: I like to serve the rösti presentation-side up—that is, the side you browned first. Cut it into wedges and serve with a big dollop of aioli and the sunny-side eggs, if using.

MAKE THE AIOLI: Combine the egg yolks, zest, lemon juice, and garlic in a blender. Pulse for 10 seconds. Switch to medium speed and very slowly begin to stream in the oils. You’re doing a dance here: you don’t want the mixture to break, but you want to incorporate all of the oil, both olive and canola. If it’s too thick to blend properly, slowly add water, a teaspoon at a time. Add a pinch of salt, taste, and adjust the seasoning accordingly.

If not using right away, refrigerate the aioli with plastic wrap pressed against the surface so a skin doesn’t form.

Kristen Kish Cooking: Recipes and Techniques, the debut cookbook from one of the most exciting young chefs in America. In one stunning collection, Kristen Kish shares 80 recipes that celebrate impeccable technique and bridge her Korean heritage, Michigan upbringing, Boston cooking years, and so much more.

Kish won legions of fans by helming two of Barbara Lynch’s celebrated Boston restaurants, and then by battling her way back from elimination to win season ten of Top Chef. Her path from Korean orphan to American adoptee, and from sometime model to distinguished chef, shines a light on her determination and love of food. Her recipes are surprising yet refined, taking the expected—an ingredient or a technique, for example—and using it in a fresh way to create dishes that are unique and irresistible.

She sears an avocado and pairs it with pickled shrimp, brightening the dish with jalapeño. A broth laced with pancetta and Parmesan is boosted with roasted mushrooms and farro for an earthy, soulful dish. Caramelized honey, which is sweet, smoky, and slightly bitter, is spiked with chiles and lemon and served with fried chicken thighs. The results are delicious, inspiring, and definitely worth trying at home.

Kristen Kish was born in Seoul, South Korea, and adopted by her family in Kentwood, Michigan, at the age of four months. She attended Le Cordon Bleu in Chicago, and went on to work for Michelin star chef Guy Martin of Le Grand Véfour at his Boston restaurant. She then worked for Barbara Lynch in Boston, first at Stir, and then at Menton, a Relais Chateaux restaurant which she ran when she was 29. Kish won season ten of Bravo’s Top Chef in 2012 after originally being eliminated and then cooking her way back into the competition through the show’s online companion series, Last Chance Kitchen. Most recently, Kristen was the co-host of Travel Channel’s 36 Hours. 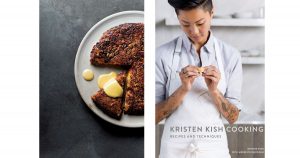