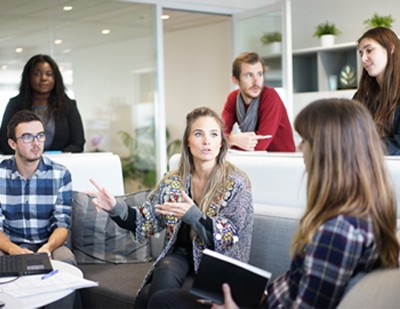 Sarah H. Elliston, author of “Lessons from a Difficult Person – How to Deal With People Like Us”, shares how to handle office drama and difficult colleagues at work, on Big Blend Radio.

Mahalia is furious.  She met the boss coming into work this morning and he said, “Hey, take a look at Reggie’s new report.  I love it.” Mahalia created the report.  Slow burn.   What to do?


There is nothing like discovering a difficult colleague at work.  Unfortunately, they exist.  Maybe yours always has to be right, or doesn’t listen or neglects meeting commitments. Or constantly criticizes anything that wasn’t their idea or, like Reggie, competes with you to take credit for your work.  Maybe you haven’t expected competition and are suddenly realizing that your professionalism is being undermined.


What to do? Don’t ignore it.  It is real. Working through these steps can help remedy some difficult relationships.

Take a deep breath. Is this the kind of person that usually rubs you the wrong way?  Who do they remind you of?  There may be someone in your past who did the same kind of thing.  Are you reacting from that experience?


If your colleague does remind you of someone in your past, make a list of how they are similar.  Now list how you are different from who you were in the past.  Consider that what triggered a reaction in your “past self” need not trigger one in the person you’ve become.


After taking a deep breath and letting go of her anger, Mahalia identified that Reggie was intimidating.  He had greater longevity and knowledge and had oriented her to the job. As she thought about it, Mahalia realized that out of loyalty she had deferred to Reggie about how the reports were developed.  She had delayed creating the improvement fearing his reaction.


Mahalia realized that he was like her brother who acted as if he wanted to play but who would pout and refuse to play again if he lost. She identified how Reggie was similar. He seemed to take lots of things personally and enjoyed being in charge.  He had appeared to be happy about her improved report but then called it his.


Now, Mahalia recognized that she was no longer a child and that she wasn’t afraid of Reggie.  While she was disappointed in him, what was important here was the report, productivity in the job, and the work relationship, in that order.


SECOND, identify the behavior of your difficult person in terms of words or actions. This can be challenging because you probably have some drama around your reactions.  If you ever want to talk to your colleague, you want to be logical, even neutral in your description of what they do.  Take time, write it down, leave out the negative comments you are tempted to use like deliberately mean, sneaky or manipulative.


Here, Mahalia was willing to take the indignation out of her reaction, to identify that Reggie had told the boss that the new report was solely his creation.


THIRD, identify the impact of the behavior.  Be professional.  It’s not that their behavior hurts your feelings but it does damage your working relationship if they don’t perform with integrity and live up to commitments.  It hurts the team when someone is constantly negative, hurts productivity and thus hurts the customer.

Mahalia was very clear that any team rapport had evaporated since she learned of Reggie’s actions. She no longer trusted him.  She feared that she would have to start double-checking to make sure he wasn’t trying to sabotage her which would slow down productivity and waste time.


FOURTH, find a trusted friend for support.  Describe your experience and ask for feedback.  Ask for help in making sure your description of the behavior is without emotion.  Practice having a conversation with the difficult person. Start with something like “Do you know that you do this?” Possibly they don’t.


Then point out the impact.  “When this behavior occurs, it has this impact.  Is that what you want?” This question is very important.  Your difficult person will be defensive no matter how kind you are.  Nobody likes to feel criticized or judged.  Have your role player erupt, say everything they can think of to make it hard for you to stay balanced.


Listen, maintain eye contact, don’t get diverted, and remind them that it isn’t personal.  You have noticed this behavior and its impact and you wonder if they realize it.  Is this the impact they want? This often requires repetition.


Be positive.  Mention what you value in the other person.  For example, try, “I value your attention to detail.  It’s an important trait but when you continue to do this, it slows down everything.  Do you realize it? Is it what you want?”


You may have to dig for something to value.   For example: “I admire your creativity.”  “I like it when you ask so many questions.  It helps me think of things I hadn’t considered.” “I respect you for your longevity and knowledge here.”


Mahalia and I practiced her response to Reggie’s denial and anger until she felt she could respond calmly to his negative reaction and stay focused on her message.


FIFTH, ask for a private meeting because it may feel like negative criticism.  Explain you need thirty to forty minutes for help with a work problem. Thank them for coming and start the conversation.  It doesn’t matter why they do what they do.  What matters is the impact and their awareness of it. Is that what they want?


Be kind.  Be patient.  Don’t react.  Listen to any responses. Acknowledge their feelings. Remind them of the behavior and the impact and that it isn’t personal. It may not be what they want to project.  Are they willing to consider a change?


Essentially, you are negotiating with your colleague to speed productivity and improve customer relations.  Keep that in mind and hang in there.


Mahalia invited Reggie to lunch and said that while she admired his work and respected his longevity and knowledge, she became upset when she learned he had claimed her work as his. She had been excited about her report and proudly shared it with him.  It hadn’t occurred to her that he would claim the credit.


He denied it. Mahalia calmly described how the boss had met her the other morning. When Reggie sneered that he had taught her everything she knew and deserved the praise, Mahalia had a response ready.  Because she had practiced the conversation, she knew what she wanted to say even though inside she was a little hot.


“Reggie, I’ve learned a lot from you, true.  And I thought we worked well together but you have damaged that relationship now.  I’d like to work this out.  I don’t care why you did it but I need you to make it right.  I want to be able to work with you.”


“Do you realize that I may not trust you now?  Did you want that?  I’ll be less apt to share new ideas and it will slow us down.  We’ll lose our reputation for being such a quick-turn-around-department; is that what you want?”


Reggie was silent and Mahalia was too.  She had practiced and she waited.


He grudgingly admitted that he had hoped to get a raise and didn’t think she’d find out. She repeated that she didn’t trust him now and asked if that was what he wanted?


He acknowledged that he hadn’t thought about how it would affect their working together.  He didn’t want to lose the reputation for speed and agreed that he would tell the boss that she had created the report.


They weren’t pals but they were able to continue working together effectively.


SIX, follow up with a conversation after a short time.  If the behavior is lessened, thank your colleague.  If it hasn’t, ask if there is something you can do to help them remember. One supervisor I know agreed on a signal that she used when her colleague was becoming overly critical.  The problem disappeared. You can become the peacemaker if possible, always looking for a solution.


Mahalia eliminated the problem by sharing her innovations with a supervisor before implementing and sharing them with Reggie. She was still able to work with him in wary cordiality.


SEVEN, if the behavior persists, you have some options.  One is to keep track of the behavior and talk to colleagues who have the same issue.  It’s possible that a group approach to the boss or the individual will have success.


You can do what you can to limit your contact with the individual or transfer to a different department and if all else fails, look for another job. It isn’t giving up.  It’s a matter of your peace of mind and finding a team and a boss that is a better fit.


Using these steps for having a conversation rather than a confrontation has eased many difficult work relationships.

Sarah H. Elliston is the author of “Lessons from a Difficult Person – How to Deal With People Like Us”. She is a faculty member of the William Glasser Institute and is a workshop leader and trainer who is certified in Values Realization, Parent Effectiveness Training and Reality Therapy. www.SarahElliston.com. 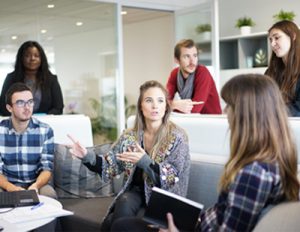