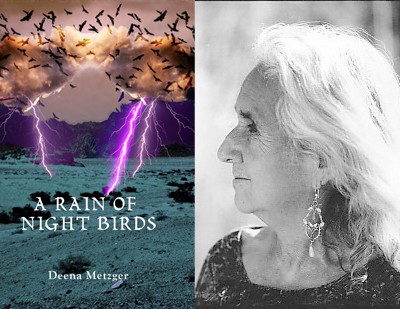 Listen to the Big Blend Radio interview with award-winning author Deena Metzger, about her new novel “A Rain of Night Birds”.

Perhaps never before in the history of humankind has the disparity between Indigenous mind and Western mind been more on the pulse of what we must pay attention to in order to insure our survival. Deena Metzger has written a novel in which two people, who are from each side of this polarity, begin a loving relationship.

Sandra Birdswell is a student of climatology with an uncanny ability to sense weather events. Her mother, who died in childbirth, is a mystery to her. Her father, John, is a Reservation doctor who afterwards raises her despite his limitations and obligations. She first meets Terrence, a Native man and a professor of climatology, at her university classes. Years later, they are drawn together by the powerful forces of their love, for the Earth, for each other, and their mutual need to seek out the broken links of their family histories. When the UN report on climate change is released in 2007, the reality of the effects of the Anthropocene era sends a shockwave through both their lives. Their relationship to each other and to the elementals they are so intimate with—lightning, thunder, rain, mountain—brings them deeply and violently into a quest to live their lives in ways that disengage from colonial mind, the same mind that brought devastation to the Native peoples, and now brings all of humanity to the brink of extinction. Through their love of and deeply felt intuitive connection to the Earth, they each go to the brink of death to find their truth, to gain strength and wisdom.

Deena Metzger is a radical thinker on behalf of the natural world and planetary survival, a teacher of writing and healing practices for 50 years and a writer and activist profoundly concerned with peacemaking, restoration and sanctuary for a beleaguered world. She has written eight works of fiction, five poetry collections, several plays and works of non-fiction. Her books examine the tragic failure of contemporary culture and provide guidance for personal, political, environmental and spiritual healing. Her novel La Negra y Blanca won the 2012 Oakland Pen Award and her Warrior Poster photograph is celebrated around the world as a testament to a woman’s triumph over breast cancer. Deena has also been actively engaged in integrating Indigenous wisdom and medicine practices into contemporary culture through her projects ReVisioning Medicine, the Literature of Restoration, Daré and the 19 Ways Training for the 5th World. Deena lives at the end of the road in Topanga, California. www.DeenaMetzger.net. 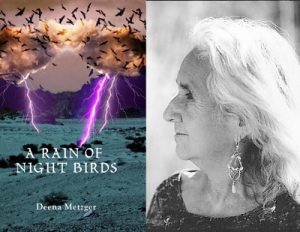