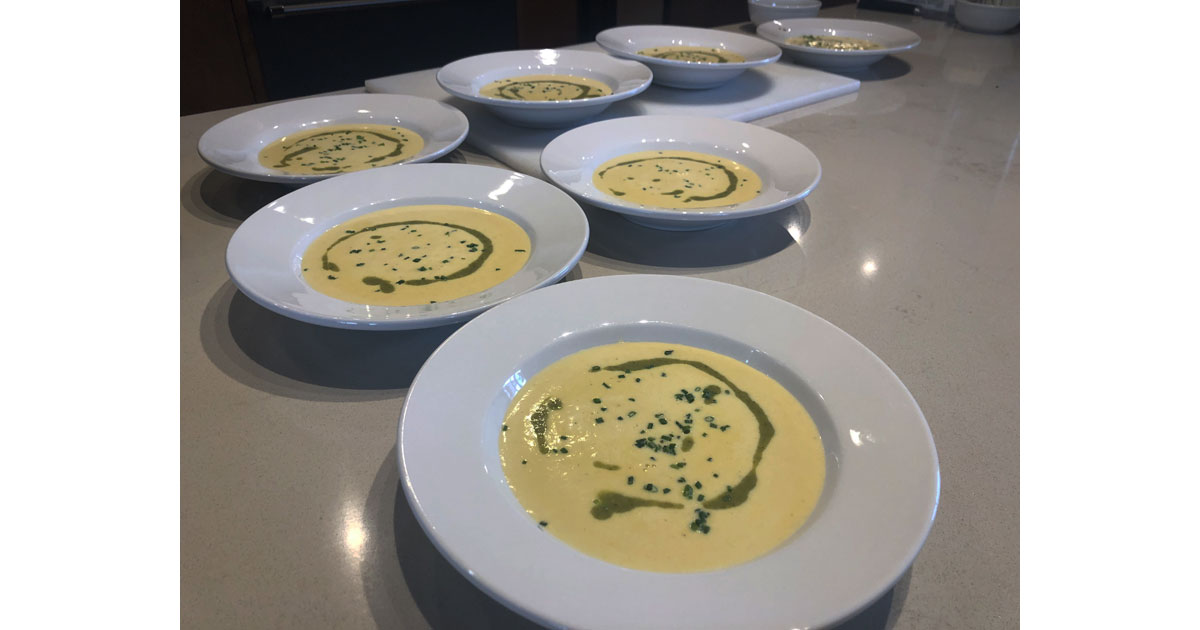 EAT LIKE O’KEEFFE & MAYBE YOUR CREATIVE JUICES WILL FLOW!
by Debbie Stone

Georgia O’Keeffe is synonymous with New Mexico. The famed artist spent the last forty years of her life living in the Land of Enchantment. She painted its dramatic landscapes and iconic formations in her own unique style. Regarded as one of the most significant artists of the 20th century, O’Keeffe’s work is treasured worldwide. And people from all across the globe travel to New Mexico to see the place that offered her so much inspiration. For many, the trip is a pilgrimage, made in homage to the great American modernist.


A major destination for visitors is the Georgia O’Keeffe Museum in Santa Fe. The museum opened in 1997, eleven years after O’Keeffe passed away at the ripe old age of 98. Its collection of over 3,000 works by the artist dates from 1901 to 1984. As you tour the museum, you’ll not only get insight into O’Keeffe’s paintings, but also into her creative process and the light, colors and shapes of the land that stirred her soul.


Those interested in seeing where O’Keeffe lived and worked can tour her home and studio in the village of Abiquiu, about an hour northwest of Santa Fe. Look for the door through the patio of this adobe dwelling. It was one of the reasons O’Keeffe bought the house, as she was intrigued by it at first sight. Over the years, she painted the door more than twenty times, in various renditions. She also drew inspiration from the picturesque view she had of the cottonwood trees in the river valley below from her spectacularly situated promontory.


Further up the road lies Ghost Ranch, where O’Keeffe’s other home is located. Though the house is closed to the public, the ranch itself is open to visitors. Now an education and retreat center, the property is also a mecca for aficionados of the artist, who go to soak up the magnificent, multilayered cliff walls, red hills and mesas that are featured in her work. It’s hard not to miss Pedernal, the flat-topped mountain to the south, which was probably her favorite subject.

In the three-hour demonstration class, you’ll explore some of O’Keeffe’s ideas about food and cooking. One of the school’s chefs, such as Lois Ellen Frank, a renowned culinary anthropologist, will then guide you through some of the artist’s recipes from the book, “A Painter’s Kitchen: Recipes from the Kitchen of Georgia O’Keeffe” by Margaret Wood. A companion to O’Keeffe for five years, Wood has personal insight into the artist’s life and her perspective on food, which she shares with the class.


According to Wood, O’Keeffe appreciated simple foods that were in season and grown locally. Her pride and joy was the organic garden at her home in Abiquiu, where she grew different vegetables such as lettuce, radishes, snow peas, carrots, cucumbers, corn, beans, broccoli and of course, green chile, a New Mexico staple. Her garden also included a variety of herbs, as she believed in their inherent health properties. Surrounding the area were an abundance of fruit trees.


O’Keeffe was influenced by the beliefs of such modern health gurus of the time as Adelle Davis, one of the most highly regarded nutritionists of the early to mid-20th century. Davis was a proponent of better nutrition for improved health and she advocated eating natural foods. Having a garden allowed the artist to exercise control over the way her food was grown and handled. And having the convenience of this bounty at her fingertips was invaluable.


O’Keeffe ground flour from wheat berries to make bread, collected watercress from along the stream for salads and soup and picked dandelion greens to put in her mashed potatoes. One of her favorite treats was thinly sliced garlic sandwiches and fried locust flowers. She also was fond of wheat germ squares with homemade yogurt for dessert. Though she certainly enjoyed her veggies, O’Keeffe wasn’t a vegetarian. She relished a good T-bone steak, as well as organic chicken.  Everything she ate was of good quality and if she didn’t grow it, she got it from the local farmers and purveyors. They supplied her with honey, goat’s milk, eggs (always brown), meat and poultry.


Working for O’Keeffe was a fascinating experience for Wood, but initially, it was intimidating. O’Keeffe was very particular about the way she liked things done. Once Wood learned the artist’s habits and preferences, though, the job got easier. She also came to appreciate O’Keeffe’s wicked sense of humor and the way she looked at things, ever so closely, noticing the tiny details that most people would miss.


As the cooking class is demonstration-based, you’re able to sit back and watch as the chef and her assistant prepare a full meal. The menu typically features Arugula Salad, Corn Soup, Lemon Chicken, Fried Potatoes and Norwegian Apple Cake with Rum Sauce. Each step in the process, from start to finish, is narrated, with information provided regarding selection of ingredients, preparation and cooking techniques, and any special equipment utilized. The session is casual with much banter and interaction between the chef and the group. Questions and comments are highly encouraged.


You’ll glean such nuggets as the rules of high altitude baking, the purpose of a micro planer, what type of cut defines “airline chicken,” the process of deglazing with whole corn cobs, the benefits of cooking in micaceous clay pots, how to wow your dinner guests with the easiest raspberry jam vinaigrette and the wonders of a sauce made with Captain Morgan Rum!


The cooking class is educational and informative, as well as fun. And most importantly, you get to reap the rewards of the chef’s hard work with a delicious multi-course meal. As you waddle out, make sure to peruse the on-site store for all sorts of cooking and kitchen-related items with a southwest twist.


Corn Soup Recipe
As featured in “A Painter’s Kitchen: Recipes from the Kitchen of Georgia O’Keeffe” by Margaret Wood.

Put the fresh, raw corn in a blender container.  Add the milk, onion, soup mix and herb salt. Blend at the highest setting for about 15 seconds.

Use a pestle to push the liquid through a sieve into a pan.

Heat the soup slowly, stirring it continuously as it thickens.

Serve immediately; do not simmer. Garnish with finely chopped chives or parsley.

Measure these ingredients into a glass storage container. Cover with a tight-fitting lid and shake the jar to combine the ingredients thoroughly. 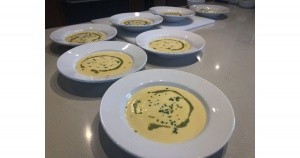