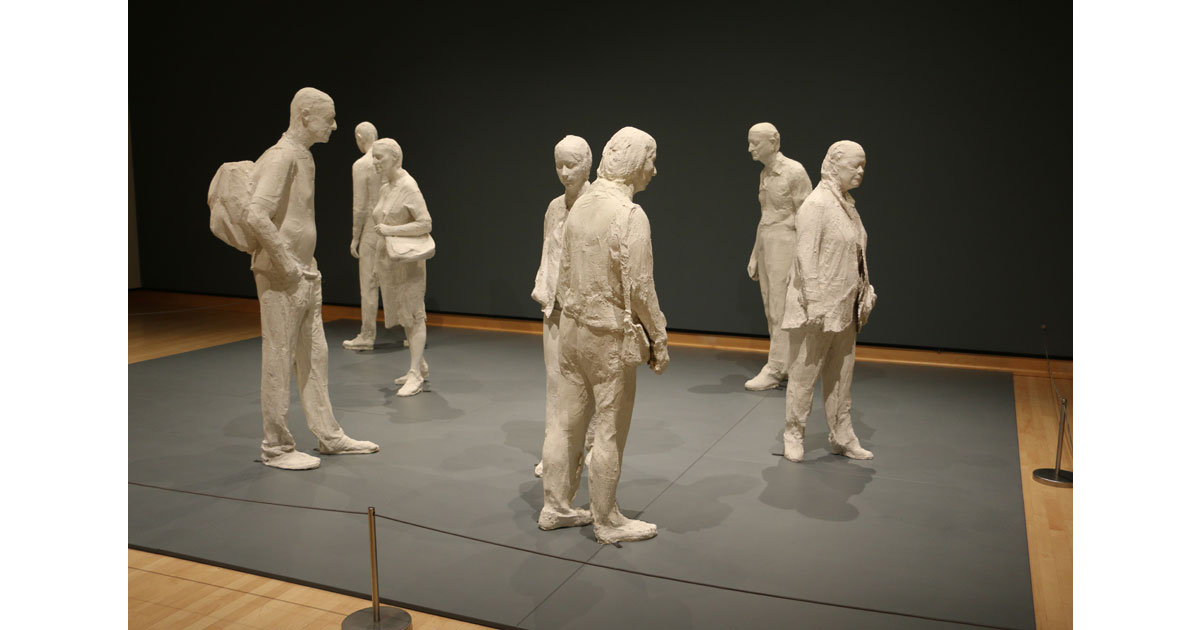 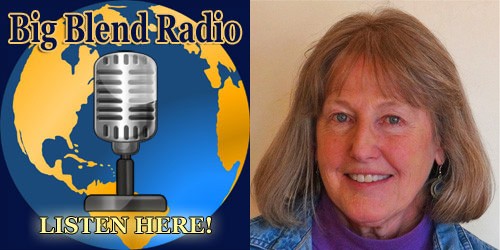 Living almost the same number of years, and experiencing many of the same cultural and societal changes that occurred in the 20th century, George Segal (1924 – 2000) and Duane Hanson (1925 -1996) lived somewhat parallel lives.


In the decades leading up to their mature styles, both were painters aware of and participating in the sequential trends of modernism, surrealism, and abstract expressionism. In the late 1950s, there was a general assessment in the art world that concluded abstraction had reached its limit. George Segal and Duane Hanson were artists who reacted by turning to Realism.


To understand these two artists it is important to know Realism took more than one direction. The prosperity of the 1950s that expanded to consumerism in the 1960s and 70s was celebrated by some artists but abhorred by others. As examples, Photorealist Richard Estes and others used projection techniques to painstakingly render surfaces and reflections of commercial objects and locations in a way that glorified them, while Pop Artist Andy Warhol presented mundane consumer objects and newsworthy celebrities as repetitive, larger-than-life icons.


A number of viewpoints were expressed in painting and sculpture, with the boundaries between approaches or the attitudes of artists toward their subjects not always clear. Sometimes two or three-dimensional visual art was accompanied by the added element of theatre in such events as “Happenings” where time was another element of a “Realist” experience. In general, visual Realism had a high level of public approval. People thought they understood it but didn’t always see the Realism as a parody of materialism or as a negative statement of society. Most people thought it quite amusing and appreciated the high degree of super-realist visual art as a skill.


Segal and Hanson began working with three-dimensional materials and both began doing life-size human figures using actual people as molds. Segal dipped gauze bandage material in plaster and made casts of his models a section at a time, removing the casts, and putting the sections together after each piece had hardened.  His sculptural figures were sometimes exhibited alone, but related to a real environment, such as a plaster figure seated on a real bench. But often he expressed relationships between figures in the presentation of a group of sculptures and still added actual elements to give a context for the grouping. The plaster whiteness of his figural work relates in the modern mind to ancient Greek sculpture, whose original painted surfaces have worn down to the white marble over the centuries.


Duane Hanson used fiberglass resin for his casting material, often including other industrial materials such as Bondo and vinyl.  He then used oil paint to simulate skin tones and features, adding real hair, clothing items, and accessories he purchased at thrift stores. His figures usually carried items such as multiple shopping bags, tools, or equipment associated with their lives, and magazines, books, or newspapers reflecting their interests. Each of his sculptures could be exhibited alone but some were meant to complement each other and were shown together. As they were exhibited, over time, in different museums, some items were changed. For instance, newspapers replaced ones that were beginning to get brittle and yellow.


Although both Segal and Hanson placed their sculptural figures with real furniture and props, the color of the figures had a great deal to do with the artists’ intent and the way they are viewed by the public. Segal’s stark white figures are remote. Many of them speak of isolation in the same way as do figure paintings by Edward Hopper or Billy Morrow Jackson. His sculptural groupings continue the theme of alienation through the amount of space between figures and their lack of color. Segal wants us to contemplate.


Hanson’s figures, on the other hand, want us to say “Hi” to them. And many people do not at first know they are sculptures.  Their naturalness of color and clothes make them approachable. Hanson seemed to see his figures with a gentle sense of humor – as people he knew and would like to introduce to us.


Victoria Chick is the founder of the Cow Trail Art Studio in southwest New Mexico. She received a B.A. in Art from the University of Missouri at Kansas City and awarded an M.F.A. in Painting from Kent State University in Ohio. Visit her website at www.ArtistVictoriaChick.com 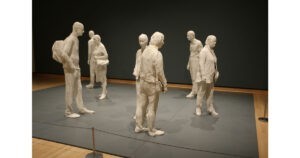