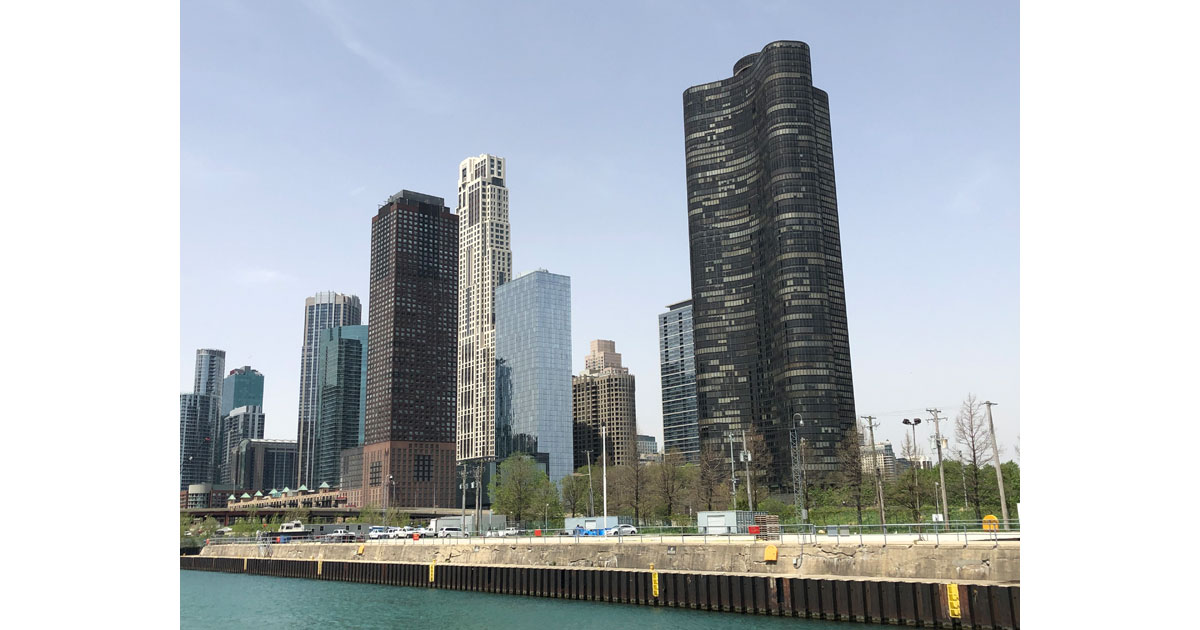 Ah, Chicago! Famous for its colorful history, vibrant culture, sports teams, food, and yes, climate, this Midwest hub is a magnet for visitors. They come to tour its venerable museums, take in a show at one of the many renowned theaters and performance venues, cheer on the Cubs, White Sox, Bulls and Bears, munch on a slice of Chicago style deep dish pizza, shop till they drop on the Magnificent Mile and stroll along picturesque Lake Michigan (unless it’s mid-winter when Mother Nature does its best to live up to the town’s nickname, “The Windy City!”).

Chicago is also an architectural mecca. It’s the birthplace of the skyscraper, boasting over 1,300 high-rises, nearly fifty which stand taller than 600 feet. This dynamic cityscape represents architectural styles ranging from Beaux Art and Art Deco to Mid-20th Century Modern and Contemporary. Over the years, innovative architects, such as Daniel Burnham, Bertrand Goldberg, Harry Weese, William LeBaron Jenney and Mies van der Rohe, helped determine the fabric and design of the town.


One of the best ways to appreciate this exciting landscape is via a Chicago Architecture Foundation Center River Cruise aboard Chicago’s First Lady. Tours are narrated by knowledgeable volunteer docents, who provide detailed information within the context of the city’s past and present. In just ninety minutes, you’ll get the best overview of Chicago’s architecture and its history, along with an understanding of the many ways the river has affected the development of the city.


The tour explains how Chicago grew from a small settlement into one of the world’s largest cities in less than 100 years. It all began in the late 1700s with Jean Baptiste Pointe DuSable, a fur trader, who was the first non-native settler in the area. More settlers arrived and later Fort Dearborn was built at the mouth of the Chicago River to protect the western most front of the country at that time. The city was eventually incorporated in 1837 with 4,000 residents. Soon, a canal was constructed to connect the Chicago River to the Illinois River, which flowed into the Mississippi, thus enabling shipping to the Gulf of Mexico. The railroad was also a transportation boon to the area.


The city was definitely on the rise, but things came to a sudden halt with The Great Chicago Fire in 1871, a catastrophic event that destroyed the heart of the town – an area four miles long and nearly a mile wide. Over 17,000 buildings were destroyed and 100,000 people were left homeless. Legend has it that the blaze began when Mrs. O’Leary’s cow knocked over a lit lantern in the barn; however, other theories hold that humans or possibly even a meteor might have been the culprit. The true cause of the fire has never been determined.


Though devastating, the fire created a clean slate for Chicago to rebuild. Architects laid the foundation for a modern city, featuring the world’s first skyscrapers. By 1890, the town was a major economic and transportation center with a population of about one million. A few years later, it hosted the World’s Columbian Exposition. The event, which was spearheaded by architects Daniel Burnham and John Wellborn Root, influenced Chicago’s architecture for decades.


As you cruise down the river, you’ll notice that many of the city’s buildings feature international styles of architecture. You can basically take these structures and put them anywhere in the world and they’ll fit right in. The Wrigley Building, for example, is comprised of two European-Renaissance-inspired edifices clad in white terra cotta tiles, with a clock tower modeled after the Giralda bell tower in Seville, Spain. Wrigley actually began as a laundry detergent company, and in each container of detergent it sold, a free package of gum was included. The gum became so popular that the company decided to do away with the detergent and sell gum instead.


One of the oldest buildings in the city, dating back to 1898, is the Fulton House. Originally a cold-storage warehouse, it was insulated with horsehair and cork, and boasted four feet thick walls and two feet thick floors. In 1981, this giant refrigerator was converted to condos and offices based on designs by Chicago architect Harry Weese.


A number of other warehouses have followed this pattern of adaptive reuse. 600 West, for example, once served as Montgomery Ward’s massive catalog center. Designed by Schmidt, Garden and Martin in the early 1900s, the structure’s horizontal emphasis and geometric ornamentation reflect the Prairie Style often associated with Frank Lloyd Wright. The building was transformed into a tech center about twenty years ago, and is presently being updated with a renewed focus on accessing the outdoors. Its location, perched on the river’s edge, is widely coveted.


Another behemoth is the Merchandise Mart. Designed by Graham, Anderson, Probst & White, the Mart, as it’s commonly called, was originally conceived as a distribution center for Marshall Field & Company. The two-city-block structure has Art Deco styling with pyramidal towers and pedestals containing busts of famous merchants.


Marina City, a Bertrand Goldberg masterpiece, was considered an urban experiment when it was completed in the 1960s. Goldberg sought to create a mixed use building in the middle of downtown to draw middle-class Chicagoans back to the city after years of suburban migration. The well-recognized 61-story twin towers with semicircular balconies comprise a complex of residences, parking, marina, restaurant, theater, shops and even a hotel.


Lake Point Tower, with its distinctive wavy curves and dark-tinted glass, is quintessential Chicago Modernism. Designed by Schipporeit and Heinrich, the building is bold and masculine, yet exudes a sense of grace. Modernism was also the purvey of esteemed architect Mies van der Rohe, whose AMA Plaza (originally the IBM Plaza) exemplifies minimalism and austerity. Occupying a prominent place on the river, this steel and glass structure stands as a powerful sentinel of the city.


Kohn Pedersen Fox’s Chicago contextualism style debut, 333 Wacker Drive, is often voted the most popular building by visitors. Its curved, shimmering, green-tinted exterior seems to reflect the color and flow of the river, as well as mirror surrounding structures. A number of buildings in the city share this quality, demonstrating the desire of architects to reference each other, as well as the landscape.


Another fan favorite is the historically inspired Tribune Tower. On the occasion of its 75th anniversary in 1922, the Chicago Tribune announced an international competition for a new downtown headquarters. In response, there were more than 260 entries from 23 countries. The winners were Hood and Howell, who designed a Gothic Revival tower using styles borrowed from the past. Incorporated in the structure’s exterior are fragments of some of the most important historical buildings in the world.  And carved in the walls inside are famous quotations from Benjamin Franklin, Voltaire, Thomas Jefferson and James Madison, extolling freedom of the press.


Newer construction projects such as 150 N. Riverside and River Point are also attracting much attention. The former seems to defy the laws of physics. Designed by Goettsch Partners, it features a 54-story tower lodged into a narrow site that is constrained by the river on one side and rail tracks on the other. This feat of engineering is actually twenty times taller than its base is wide. River Point is located where the main stem of the river meets its two branches. The ultramodern structure sits behind rail tracks hidden in a tunnel – on top of which is a public park. The arched cutouts of the building reflect its shape and the curves of the banks around it.


Women architects figure prominently in Chicago’s cutting-edge architectural scene. Among them is Jeanne Gang’s firm, Studio Gang, which designed Aqua, an award-winning hotel and residential tower. The building’s unique rippling balconies (each one different) and colored glass give it a sculptural quality and create the impression of water flowing down its sides. It’s also planet-friendly with a host of energy-efficient features.


After your boat tour, make sure to take time to stroll along the scenic Chicago Riverwalk, a continuous pathway connecting the lakefront with the heart of downtown. You’ll have the opportunity to get a different perspective of the cityscape, plus there are plenty of cafes and watering holes to stop at when the mood strikes. And the people watching is a recreational pursuit in itself! 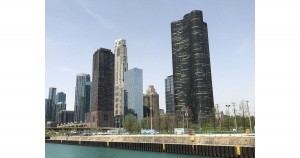