The Creative Force of Love and Hate 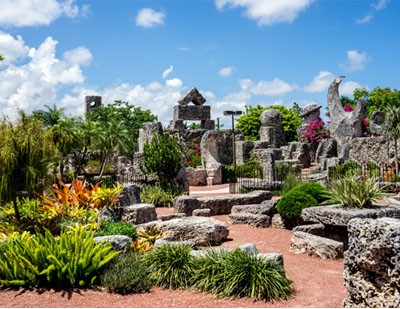 THE CREATIVE FORCE OF LOVE AND HATE

All over the world are examples of the work of untrained artists whose creative instincts seem to have been propelled into building obsessive constructions by their internal feelings of love or hate. Two examples are The Coral Castle in Homestead, Florida, conceived and built by Latvian immigrant, Edward Leedskalnin, between 1920 and 1951 and the Garden of Eden in Lucas, Kansas built by Samuel Perry Dinsmoor between 1905 and 1932. Both these visionary constructions were at the same time residences and expressive statements.

Samuel P. Dinsmoor joined the Union Army when he was 14. As a Civil War veteran he went to seek his fortune in Illinois where Union Soldiers had been paid with parcels of land for their military service. He taught school a few years and tried to farm but found the land so impermeable, because it was heavy with clay, that farming was next to impossible. So he sold it and went with his first wife and children to farm near Lucas, Kansas. After retirement, about 1905, he bought a block of land in Lucas and began building his “cabin” and the Garden of Eden. The cabin material was post limestone, a common sedimentary rock in Kansas and often used for building. However, Dinsmoor had it quarried in long log-like pieces textured like bark and had the ends notched like logs so they fit snuggly together at the corners. He also built a mausoleum for himself in his backyard using the same material and style.


Dinsmoor had a rudimentary amount of Biblical knowledge. Many of his philosophical ideas had come from the political populism after the Civil War and his involvement with Freemasonry. These influences coalesced in concrete sculptures around his house in Lucas. Life size and larger concrete figures of Adam and Eve, concrete trees and vines, and a concrete serpent with a red painted apple all compete for a viewer’s attention with concrete American flags, concrete effigies of the bankers, lawyers, doctors, religious leaders, and concrete metaphors of the Big Business he distrusted and hated. These concrete sculptures eventually numbered 150, including symbolic animals and thirty cement trees. At 81, after being widowed for 7 years, he married a 21 year old woman and had two more children.  He died in 1932 and his body was placed in his pyramidal mausoleum where you can see his mummified remains through a glass window. He had an axe placed next to him so he can break the glass on Judgement Day and be ready for the Resurrection.


The Garden of Eden was voted one of the 8 Wonders of Kansas and is well worth driving 11 miles north of I-70 to Lucas to see it. Also accessible from I-70 nearby are National Historic sites in Salina and Abilene, Kansas.


The attraction now known as the Coral Castle in Homestead, Florida was moved there by its builder Edward Leedskalnin from Florida City. Leedskalnin was motivated by the unrequited love he had for a 16 year old girl from his native Latvian town. She ran away the night before they were to be married. His disappointment led him to emigrate, first to Canada and, then to the United States. He developed tuberculosis and was advised to go to Florida for his health.  There, he recovered from his illness and became fascinated with a type of local limestone rock formed from coral. He lived and worked building Rock Gate Park, dedicated to the 16 year old who left him. He worked at night and was completely secretive about his methods of quarrying and moving the giant rock slabs. People could not believe he could do this alone with only very simple tools. Although he had a very limited formal education, leaving school in the 4th grade, he loved learning and spent his young years reading. When people would ask him about how he managed to move the thousands of tons of rock slabs he would explain he had a good knowledge of physics and understood how the Egyptians were able to build the pyramids.


About ten years after he began building, he decided to move everything to Homestead, Florida. He hired a truck, but loaded everything himself. No one saw how Leedskalnin, at five feet tall and weighing about 100 pounds, achieved this feat. In Homestead, he re-established his project and expanded it with more coral rock sculptures and plants around  the garden and castle. He renamed it the Coral Castle. Many people felt he always hoped his bride-to-be would come back and his castle would be ready for her to move into. Some of his writings express strong views on the necessity for young girls to remain pure. Although it is tempting to draw conclusions about him, his run-a-way bride, and his obsession in building his castle, not all the facts are known.


The Coral Castle, now a museum, is open to the public and is located in the Miami area between Biscayne National Park and Everglades National Park.

Both Dinsmoor and Leedskalnin were secretive about their work, Dinsmoor mixing much of his concrete alone by moonlight, and, as mentioned, Leedskalnin never letting anyone see how he moved his blocks of stone. Both were associated with “secret knowledge” from the past in doing their work, Leedskalnin from reading and Dinsmoor from the Freemasons. I visited the Garden of Eden 56 years after Dinsmoor’s death and was impressed that the concrete work there had developed no cracks, and even though mixed over many years in small batches, had no color differences nor could I see seams where one batch was added to another to complete a sculpture. Neither artist had much education but both used their specialized knowledge and their strong emotions of love or hate to create places that continue to amaze visitors.


Victoria Chick is the founder of the Cow Trail Art Studio in southwest New Mexico. She received a B.A. in Art from the University of Missouri at Kansas City and awarded an M.F.A. in Painting from Kent State University in Ohio. Visit her website at www.ArtistVictoriaChick.com. 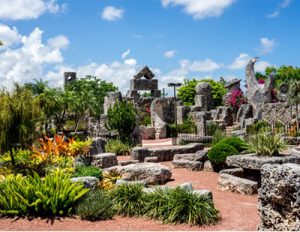