The Heart and Science of Yoga 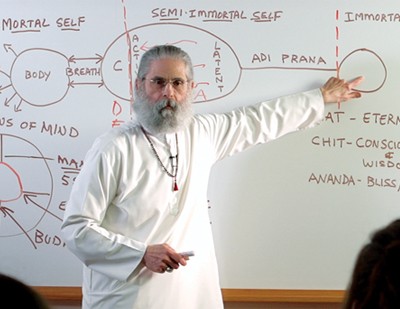 THE HEART & SCIENCE OF YOGA

Yoga Science Teaches Us How to Transform Energy

By Leonard Perlmutter, author of “The Heart and Science of Yoga: The American Meditation Institute’s Empowering Self-Care Program for a Happy, Healthy, Joyful Life”. Listen to the Big Blend Radio conversation with Leonard Perlmutter about Yoga Science, Meditation and Consciousness and enjoy his article below.

You learned in grade school science class that energy can appear in either the potential or kinetic form. The electricity in the wiring of your home is available for any use you choose. When you turn a light switch to the “on” position, energy appears in the form of light. This is the kinetic state because the energy is being used or expended. However, when you turn the light switch to the “off” position, the energy remains in the potential state–ready to be used at the flick of a switch.

The inherent power of fear, anger and self-willed desire can also be stored potentially or expended kinetically, and it is your personal attention that determines in which state the energy resides. If the mind’s conscience, known as buddhi in Sanskrit, defines a particular thought as a form of energy that will enable you to fulfill the purpose of your life (a shreya), it is suggesting that you transform the state of that thought energy from the potential into the kinetic by taking some appropriate action. In other words, you are encouraged to think about the shreya, speak in service to the shreya, and take some physical action in service to the shreya.

Such emotions as fear, anger and greed are not inherently bad or negative, for if they’re handled skillfully, they can become helpful resources. If the conscience (buddhi) recognizes them as merely an ego or sense gratification that conflicts with your own Inner Wisdom, (known as preya), you are being asked to renounce your attachment to them so that their intrinsic power can be transformed and stored for your future use.

The laws of physical science state that energy cannot be created nor destroyed, but it can be transformed. Viewing Yoga as a sister science, the ancients experimented with controlling, conserving and transforming the energy of thought. Through trial and error they realized that when they renounced a single preya desire-what could be seen as a momentary temptation or a negative thought — the energy of that desire manifested in a different form.

Recognizing this process, imagine what would happen if, instead of gasoline, twenty gallons of crude oil directly from the fields of Saudi Arabia were pumped into your car’s gas tank. It would wreck your engine. Crude oil is simply of no use in a combustion engine. To become an appropriate fuel for your automobile, the raw oil must first be refined.

Each of us has the capacity to employ a refining process that can transform the raw, inherent power of every thought, desire and emotion. When the mind’s conscience, the buddhi, intuitively advises that the unusable, destructive and constrictive power of a particular fear, anger or self-willed desire is appearing in your awareness in the form of preya, you, as a Yoga scientist, have access to a mechanism for capturing and transforming that power. This refinement process is accomplished by consciously and willingly renouncing your attachment to the preya.

Remember, in every moment, the buddhi is always present to advise you that it’s not in your best long-term interest to give the preya your continued attention. If you consciously or unconsciously choose to serve the preya in thought, word or deed, you will experience some form of physical, mental, emotional or spiritual dis-ease.

Every thought, word and deed is a means for spiritual unfoldment. Recognizing that desire is the fuel for human action, the ancient sages conceived a scientific formula that might well be called the spiritual equivalent of Albert Einstein’s E=MC2. The formula they discerned was D = E + W + C.

Every desire is composed of three basic components: energy, will power and creativity (consciousness). When you align every thought, word and action with the wise and good counsel of the buddhi by serving the shreya, you’ll be led for your highest and greatest good. When you willingly and consciously surrender your attachment to the merely pleasant, comfortable, familiar and attractive preya, you really give up nothing of value. The intrinsic power of the preya is not lost to you. Instead, your voluntary act of sacrifice automatically transforms the preya into internal reserves of energy and will power, and opens the doorway to the superconscious mind–your access to the Divine source of intuitive wisdom and creativity.

Conversely, when you go against the advice of the mind’s conscience (buddhi) by serving the ego or sense gratification that conflicts with Inner Wisdom in thought, word and deed, your internal strategic reserves of energy, will power and creativity are diminished.

The major crisis of our culture today is not one of IQ–intelligence quotient. Rather, the problem we face individually and collectively is one of WQ–will quotient. In twenty-first century America, countless people possess the intellectual capacity to make brilliant decisions, but because they are habituated to serving the limited perspective of the ego, senses and unconscious mind, their reserves of will power have become bankrupt. Without sufficient will power to exercise discrimination, their reserves of energy and creativity are similarly diminished. The more these reserves are depleted, the more frequent and severe the tension, stress, anxiety, burnout and pain.

As in banking, our personal balance sheet always reflects whether deposits or withdrawals have been made. The choice of solvency or bankruptcy is up to each individual.

In modern life, you need plentiful reserves of energy, will power and creativity to fulfill your many duties and responsibilities. You have obligations to yourself, your family, friends, business associates, society, the animal kingdom and the good earth Herself. Yoga Science teaches that everything you need for a happy, healthy and secure life is always available in the form of your thoughts, desires and emotions. A ready supply of power arises within you daily in the form of fear, anger and selfish desires. If you do not expend this power kinetically in the present moment, you can consciously conserve and transform it for use at another time. Yoga Science offers a systematic, practical method for conserving and transforming energy. It’s very simple, and all it takes is knowing how to direct your attention appropriately, based on the intuitive wisdom already within you.

Leonard Perlmutter, founder of the American Meditation Institute (AMI), is the author of an acclaimed book “The Heart and Science of Yoga:The American Meditation Institute’s Empowering Self-Care Program for a Happy, Healthy, Joyful Life,” an encyclopedic guide to meditation and the Yoga Science that supports it. Praised by such international medical luminaries as Drs. Dean Ornish, Mehmet Oz, Bernie Siegel and Larry Dossey, this ultimate guidebook not only explains what to do, BUT WHY TO DO IT. It delves into Yoga Science, the eight-step method for managing the life force energy that propels us and connects us to the infinite power and creativity that is within and without us all. And the result of mastering it is the bliss and daily joy that comes from the realization of our connection. For more information, visit www.americanmeditation.org 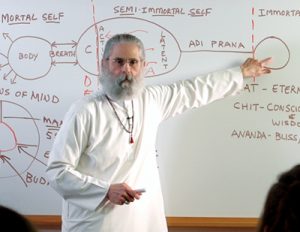