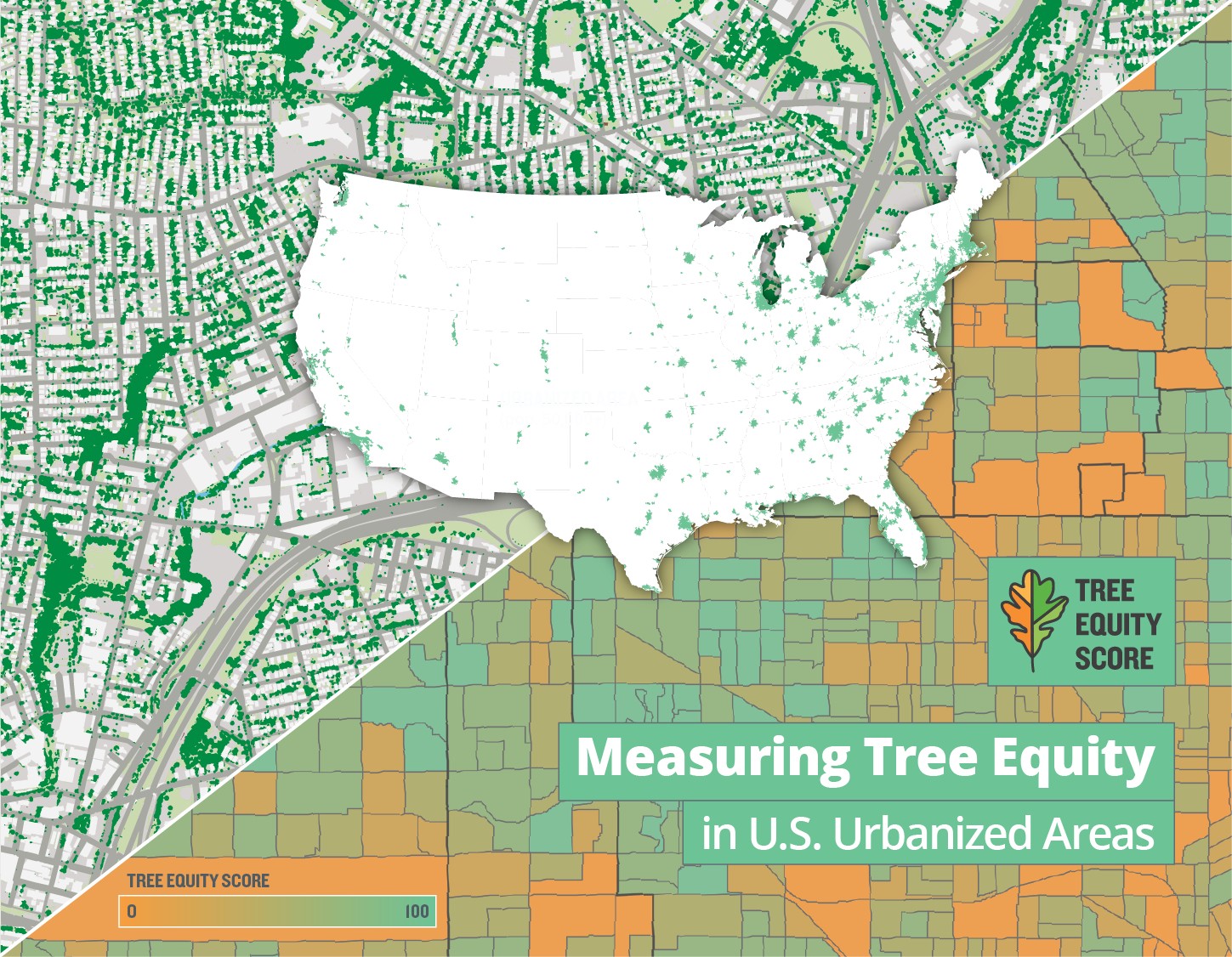 BIG BLEND RADIO: Jad Daley, President & CEO of American Forests, talks about their first nationwide tally of Tree Equity scores, an evaluation that shows how the amount of tree cover in America’s cities is too often dependent on income and race. Watch here on YouTube or listen to the podcast on PodBean or SoundCloud.

American Forests, the nation’s oldest national conservation organization, recently released its first nationwide tally of Tree Equity scores, a calculation that evaluates equitable distribution of tree cover in the United States. The Tree Equity Score (TES) tool identifies the cities that can gain the most significant health, economic and climate benefits by increasing tree canopy in places of high need.

TES combines socioeconomic status, existing tree cover, population density and other information for 150,000 neighborhoods and 486 metropolitan areas to determine whether locations have enough trees to provide optimal health, economic and climate benefits. Achieving Tree Equity nationwide requires planting 522 million trees, coast to coast, in metropolitan areas (places with 50,000+ people). Doing so would sustain 3.8 million jobs and annually absorb 9.3 million tons of carbon – the equivalent of taking 92 million cars off the roads. As the trees mature, they would mitigate 56,613 tons of particle pollution annually.

“Our Tree Equity Score will help make us all accountable and create action at the local, state and national levels,” said Jad Daley, president and chief executive officer of American Forests. “It shows us exactly where the problems exist, where we need to concentrate investment to solve them, and where we need to bring people together – all different types of people and organizations.”

Daley asserts that the Tree Equity scores should play a significant role in helping shape government, private-sector, and non-profit policies and funding for protecting existing trees, as well as planting and taking care of new ones.

TES documents trees are sparsest in under-resourced neighborhoods and more prominent in wealthier, often whiter communities. The findings confirm a disturbing pattern of inequitable distribution of trees that has deprived many communities of color of the health and other benefits that sufficient tree cover can deliver. Neighborhoods with a majority of people of color have 33% less tree canopy on average than majority white communities. And neighborhoods with 90% or more of their residents living in poverty have 41% less tree canopy than communities with only 10% or less of the population in poverty.


These communities face many disadvantages. Global average temperatures are rising, and longer and hotter heat waves lead to intensifying smog. Trees help cool neighborhoods and reduce what’s called the “urban heat island effect,” the creation of “islands” of heat that result in a dangerous rise in temperature and disproportionately affect vulnerable populations, low-income communities and people of color. The urban heat island effect, made worse by climate change, has serious effects on people’s health, especially children and the elderly. On average, urban heat islands are 5 to 7 degrees warmer during the day and can increase temperatures by as much as 22 degrees at night. If actions aren’t taken to slow climate change, heat-related deaths from 2031 to 2050 could be 57 percent higher than they were from 1971 to 2000.

TES calls America to action on Tree Equity. “It is a moral imperative that we do so,” Daley said. “This country is denying life and death infrastructure to people based on income and race. That’s morally insupportable. This is just completely at odds with our values as a country.” 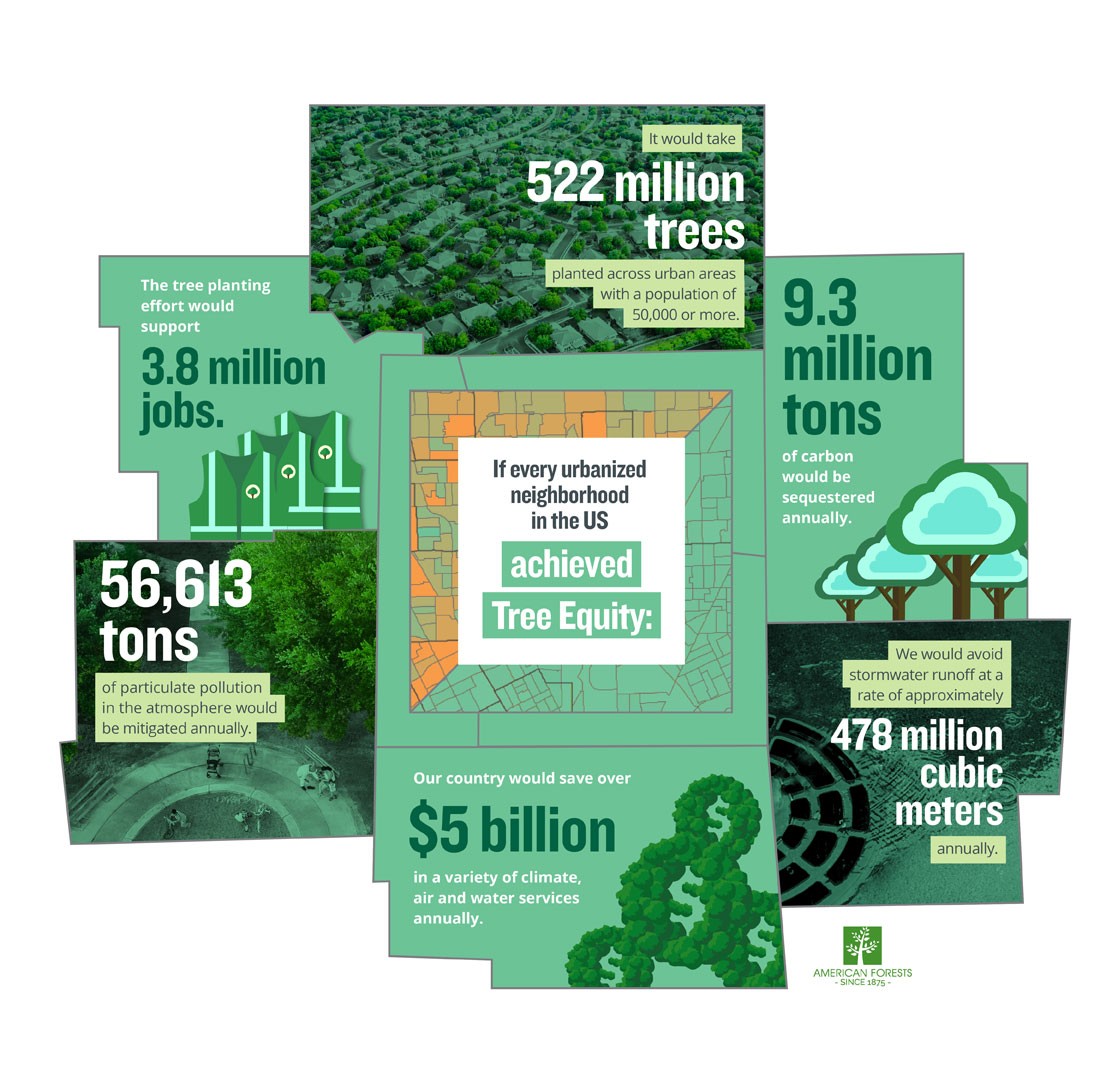  Cooler temperatures, fewer deaths and illnesses. By providing shade, trees help prevent heat-related illnesses and deaths. Trees lower air temperature by up to seven degrees during the day and 22 degrees at night while absorbing pollutants, making it easier to breathe. Trees also help improve mental and physical health when outside exercising or relaxing under and around them. American Forests research in Dallas showed heat-related deaths could drop by 22% with a combination of trees and reflective surfaces.

 Boosting the economy. Planting and taking care of trees can create jobs all along the urban forestry supply pipeline, from digging holes to taking care of trees to creating wood furniture, plus numerous adjacent jobs held by people who support these workers (i.e., tool manufacturers, restaurants, shippers, etc).Trees also lower utility costs by shading buildings in the summer and blocking wind in the winter.

 Mitigating climate change. Trees in urban areas of the U.S. are responsible for 20 percent of all of the carbon emissions that forests in the U.S. capture and store. That amounts to nearly two percent of overall U.S. carbon emissions. Also, more trees mean less use of air conditioners and heaters, resulting in millions of tons of carbon that are not emitted. Trees help us adapt to climate change by absorbing water (which reduces flood risks), reducing air temperatures, and more. 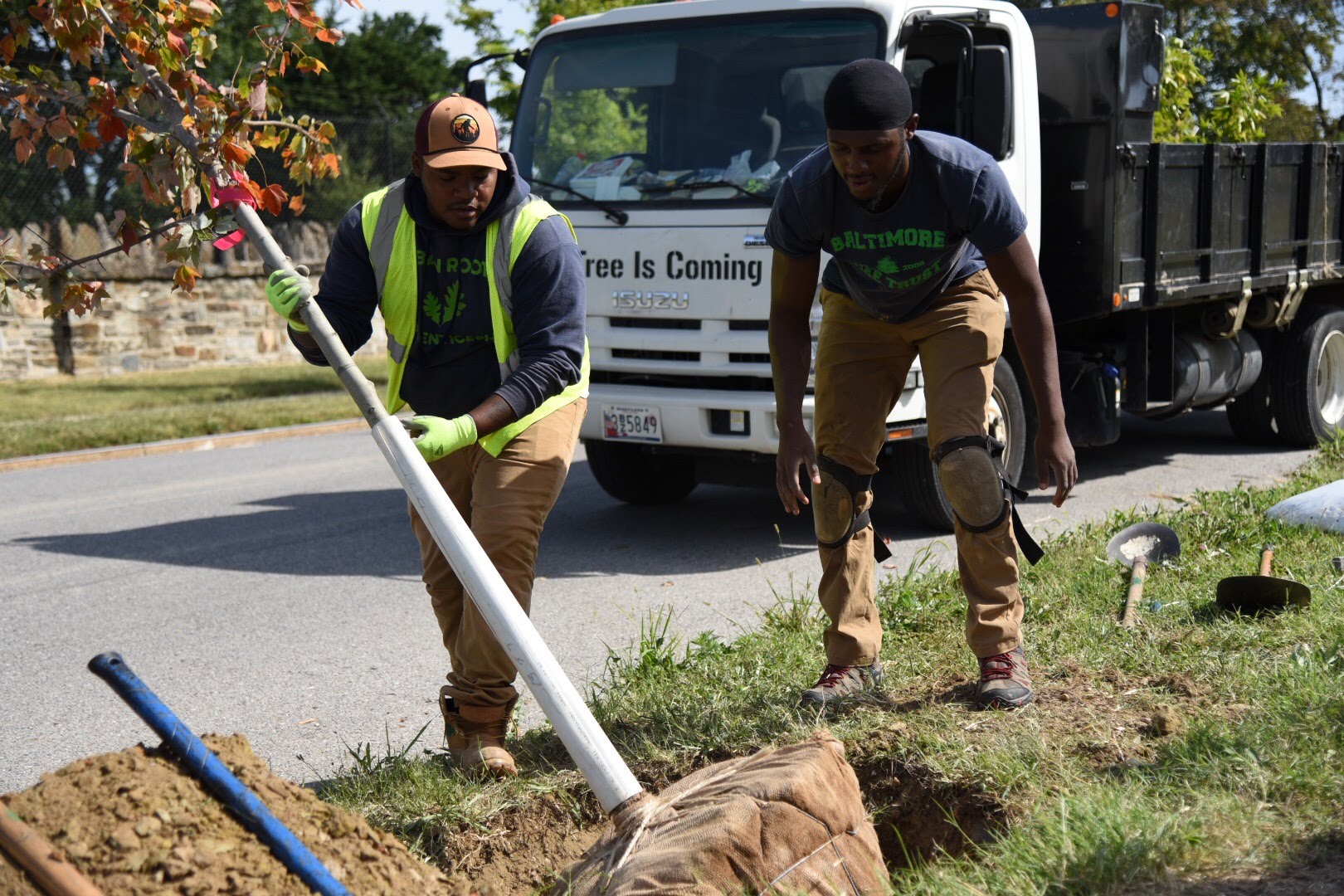 The Tree Equity Score Is A Robust And Groundbreaking Tool

The Tree Equity Score is unique in that it provides an unprecedented depth of detailed information that is free, easy to access and to use. It provides a vocabulary and guide path for understanding and talking about the intersection of social equity and the state of trees in America, including why trees are distributed unequally, and how to rectify the inequity. It emphasizes the value of maintaining and protecting existing trees so that new trees are additive. Anyone can use the tool to better understand how well their neighborhood and metropolitan area is faring toward adequate tree canopy. Find your Tree Equity Score at https://www.treeequityscore.org/

The national data shares great depth about tree canopy detail, and additional local data layers can be incorporated through the Tree Equity Score Analyzer. All of this adds up to specific information on neighborhoods and individual land parcels showing where planting more trees would result in Tree Equity. The tool also estimates and compares the climate and health impact of numerous tree planting scenarios that can be used for planning, fundraising and policymaking.

Direction for Action, Nationally and Locally
American Forests is compelled to act because, in urban communities, one tree is lost for every two trees planted or naturally regenerated, according to their recent study completed with Dr. David Nowak of the U.S. Forest Service. “The loss is mainly due to natural disasters, the difficulty of growing trees in urban areas, tree removal for development, and improper planting practices,” Ian Leahy, vice president for urban forestry at American Forests, said, adding that by 2060 the projected loss of tree canopy in urban areas across the country is expected to reach 8.3 percent.

“The scale and pace at which trees are planted or naturally regenerate must significantly increase if trees are to continue to make people healthier or slow effects of climate change,” Leahy continued.

To create Tree Equity in urban America, planting trees in the neighborhoods that need them most and providing proper care must be a priority. Moreover, the rate of planting new trees must increase significantly to 31.4 million trees a year to advance Tree Equity, according to American Forests’ 2021 urban forestry study. American Forests’ uses a change model, derived from academically-vetted best practices, to enact long-term and systemic urban forestry improvements with government agencies, community groups, scientists, corporations, universities and others.

American Forests also hopes to expand place-based partnerships in cities where science-based data can guide the planting and caretaking of trees. The organization is also strongly advocating for more local, state, and federal policies and funding to support the data-driven plans. Specifically, American Forests is helping:

Further, American Forests also provides other tools and resources to assist cities and communities. The Vibrant Cities Lab, a site managed with the U.S. Forest Service, is the preeminent online resource for urban forestry research, tools, and case studies. Innovative conservation financing is available through their partnership with City Forest Credits. And American Forests is building support for federal legislation related to urban forests and working to see that urban forestry funding is included in the final infrastructure plan from the Biden-Harris Administration.

“We need to make sure the trees go where the people are,” said Daley. “And more than  70% of the people live in cities or suburbs so, it’s a place-based problem with a place-based solution. Tree Equity Score steers us in the right direction, and now it’s up to all of us to go beyond business as usual and take bold action.”

American Forests is the first national non-profit conservation organization created in the US. Since its founding in 1875, the organization has been the pathfinders for the forest conservation movement. Its mission is to create healthy and resilient forests, from cities to wilderness, that deliver essential benefits for climate, people, water and wildlife. The organization advances its mission through forestry innovation, place-based partnerships to plant and restore forests, and movement building. TES is supported by the Doris Duke Charitable Foundation, EarthDefine, The Summit Foundation, Microsoft, Seed Fund and the United States Forest Service.  More at https://www.americanforests.org/ 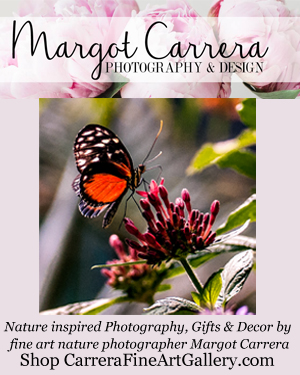 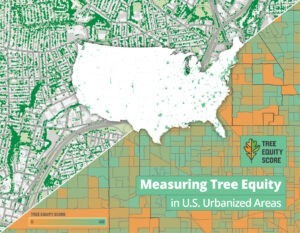